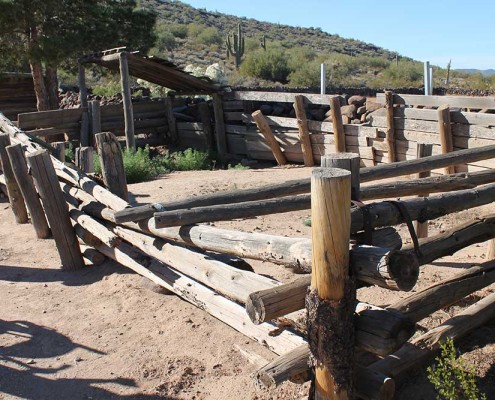 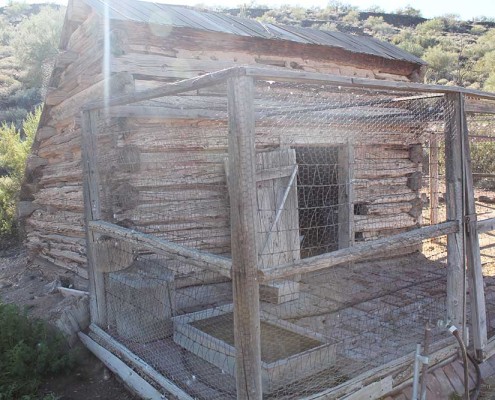 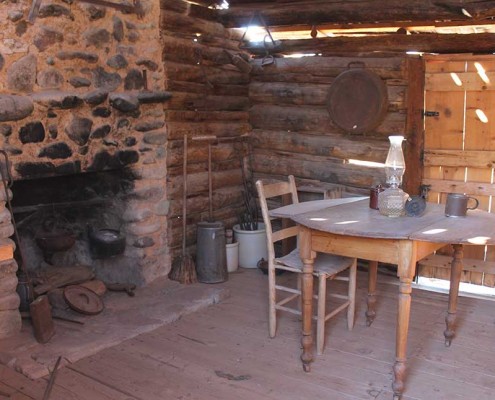 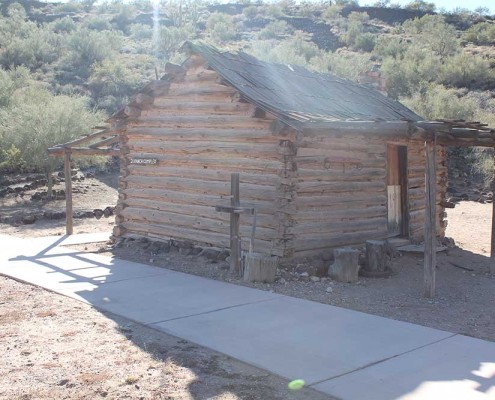 The house is an original 1870 structure moved to Pioneer Arizona from Gordon Canyon (Payson area). It represents the type of housing built soon after the homesteaders’ arrival in a new area and was common to northern and eastern Arizona where timber for building was readily available. Note the wooden pegs in the floor. A similar lay-out would be used in more arid areas of the state, the difference being that the house would be built of adobe.

The fireplace was used for both cooking and heating. Although cook stoves were manufactured in great numbers in other parts of the country, they were heavy and took valuable space in freight wagons (pulled by animals) and were often expensive luxuries on the frontier, especially prior to the railroads.

A cabin of this size would have typically housed a family of four to six. The parents would sleep on the bed, the children on the floor with pallets or quilts that they rolled up and stored under the bed come morning. There were always plenty of chores to be done outside; a ranching family was seldom in the house except to cook, eat, and sleep.

The spring house and root cellar are reconstructions of structures which stood on the ranch in 1880. The root cellar was built back into the hill for insulation. The ranchers would store vegetables for winter usage as well as seeds to plant the following year. The walls are two feet thick. The spring house would have been constructed over a flowing spring of cool water. Milk, eggs, cheese, and butter were kept in the spring house which was insulated with two-foot-thick walls and a sod roof. You may compare it to a modern-day refrigerator.

The chicken coop is from Coconino County. This is typical of what a pioneer would build and live in when first settled. After he got his barn built, the crops in, and the start of his herd, he would have to build his house. When the house was completed, he would have a chicken coop safe from varmints. We have the same problems with wildlife as the pioneers did. Coyotes get our fowls, if they are not put up at night, and the chicken coop has been reinforced for the safety of the inhabitants.

The rock wall that encloses the garden area is 4 feet high, 4 feet wide at the base, and 42 inches wide at the top. It was built by hand, without mortar, and took 15 months to complete. Light rabbit wire and barbwire were unknown in this period. Original rock walls can be found near Bisbee on ranches, at Dragoon Springs in southern Arizona, and Cherry Creek Stage Station in the Mingus Mountain region. The rock wall would have enclosed a garden and orchard sufficient to provide for a family of six and their animals.