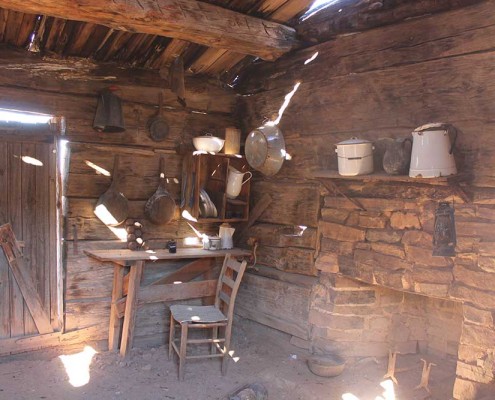 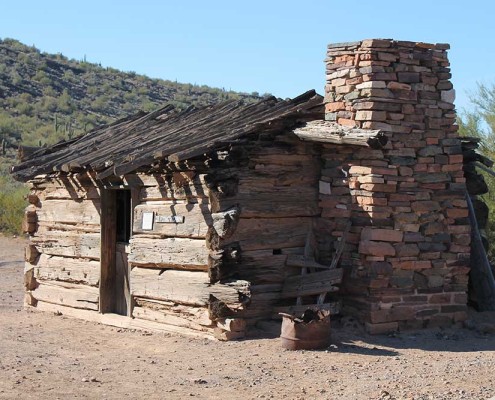 This cabin, with gun ports, was typical for its time and place. From the 1880s to the turn of the century, starving Apaches from the neighboring reservation raided Pleasant Valley for food and livestock. Several settlers died during these raids.

John Tewksbury and brothers Ed, James, and Francis began homesteading Pleasant Valley after their father, James Dunning Tewksbury, brought them from Humboldt County in northern California sometime after the death of their mother, who was of the Bear River Clan. Eventually, James D. Tewksbury and his second wife and her children joined the brothers in Pleasant Valley.

John Tewksbury was killed during the Pleasant Valley War, which grew out of the defensive effort against raids into a civil war among neighbors. Settlers engaged in an escalating round of criminal complaints against each other, and dissatisfying court outcomes led to shootouts and assassinations. The conflict ended in 1892 with Tom Graham’s murder near Tempe. Ed Tewksbury was tried twice for the murder, but his case was eventually dismissed. John Rhodes’s trial was dismissed for lack of evidence, but not before Tom’s widow, Annie, tried to kill him with her deceased husband’s pistol. Eighteen men died from the conflict, and eight more were wounded. Others bore the trauma of it for the rest of their lives.

After John Tewksbury’s death, George Newton and J.J. Vosberg bought this cabin and used it as a ranch building and later as a line rider’s cabin.