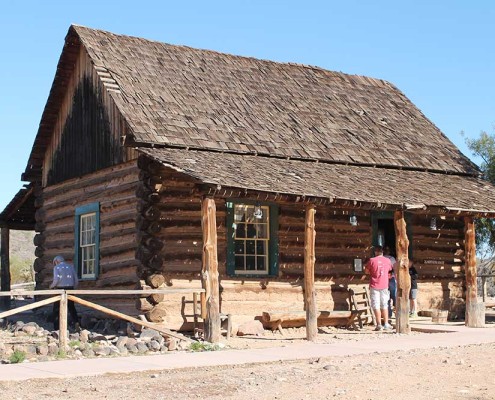 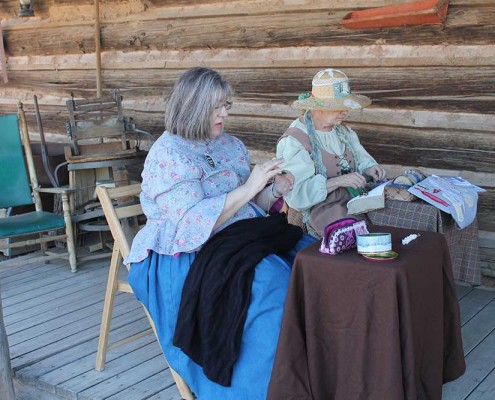 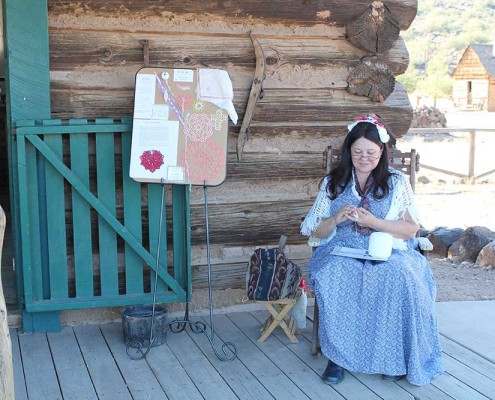 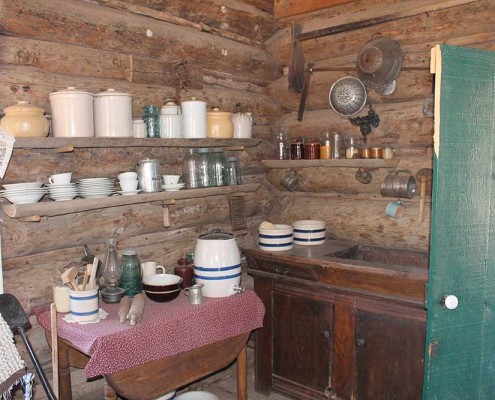 This building, an example of “saddle and rider” notching technique, is an original structure moved to Pioneer Arizona from Newman Canyon which is about 25 miles southeast of Flagstaff. It was probably built around 1885. The home belonged to Jeff D. Newman who arrived in Arizona prior to 1886 with his family which included his wife, three sons, and five daughters. The Marshall Lake Cattle Company donated the building to Pioneer Arizona.

This unusually large 1880’s cabin was the home of a cattle ranching family. The half loft now seen in this cabin originally extended the entire length of the building but was only restored across half in order to make the loft storage and children’s sleeping area viewable to the public. Half-lofts were also common. Access to the loft would have been via cleats nailed to the logs or a wood or rope ladder. Snow blew through the eaves in the winter, but it was nice and dry in the rain due to the swelling of the cedar shingles when wet.

In the yard is a cast iron pot which was used for washing clothes, making soap, and heating water. The fence is made of yellow Jasmine logs. Also, there are two split-log benches.

In 1967, the Women’s Club in Phoenix held a fair to raise funds to move the cabin from Northern Arizona. The building was dedicated to Nellie T. Bush, a former legislator and Arizona’s only woman ferry boat pilot.

Meat was often cured in brine, and then smoked. Lots of sausage was made. Each family smoked its own meat. Later, smokehouses were built that charged for smoking. Every part of an animal was used or eaten. Liver, heart, and tongue of pigs were made into “finker” when cooked with apples and thickened with flour.

From On the Border with Crook by John Gregory Bourke: