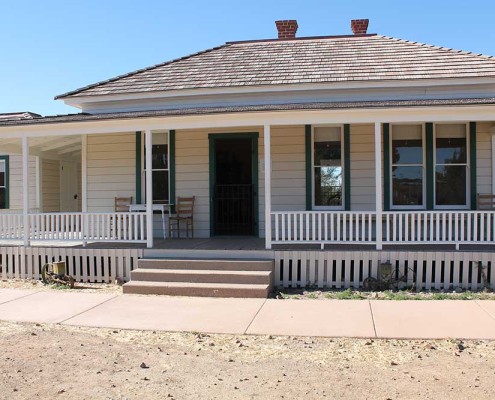 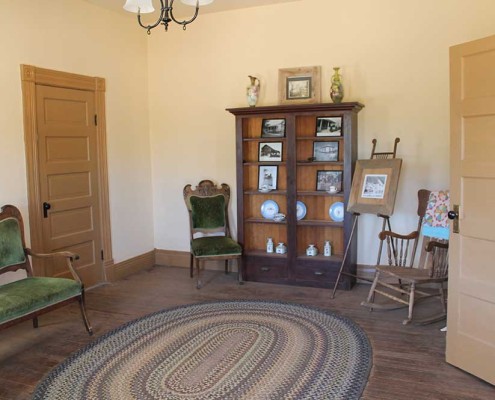 It was around 1910 that John and Emma Meritt sold their farm in Nevada, Missouri and moved to Arizona, along with their two sons Glenn and Melvin. They bought a 100 acre farm irrigated by the Arizona Canal, which had been completed in 1885. Their daughter, Beryl, was born on the farm in 1915, and it was her home until 2008, when she donated it to Pioneer Living History Museum.

The main house is comprised of three rooms and a large pantry, later converted to a bathroom. The porch wraps around three sides of the house providing additional living space. Evenings were spent relaxing in its shade. Clothes were laundered by the back door. Eventually, sections of the porch were closed off to be used for sleeping, as the children grew older and desired privacy. Today, we see it as it was originally built, without the enclosures.

The kitchen was a separate structure, sometimes called a “summer kitchen” meant to keep excessive heat away from the main house in the hot Arizona climate. Other unique innovations of the time are apparent in this turn of the century home. After the Meritts moved in, John installed a carbide generator, which provided gas for lighting until the house was wired for electricity. Another improvement is located in the attic, one of the first solar water heaters found in Arizona.

The other buildings brought to Pioneer from the original homestead include: the Water Tower, used to store water for the farm (the boys raised pigeons in its base); the Granary, where seed and grain were stored while chickens nested on the outside; and the Carriage House, later converted to a garage.

Crops raised on the farm included cotton, corn, wheat and alfalfa. An orchard of grapefruit, orange, apricot, plum, peach, lemon, and fig trees provided fruit to eat and sell. The farm usually had forty to fifty head of cattle, and the family also raised sheep. The Meritt homestead provided the necessities for a comfortable life and enough income for a few luxuries over the years.