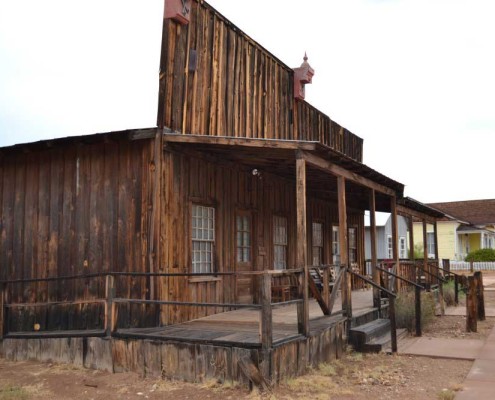 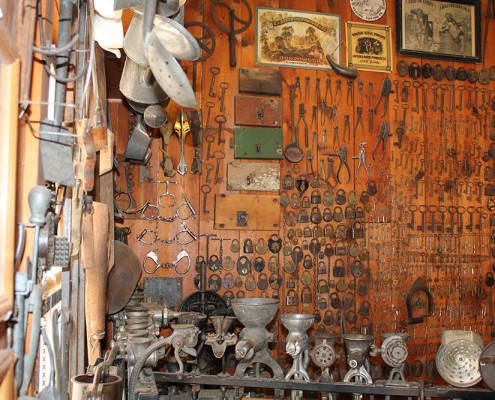 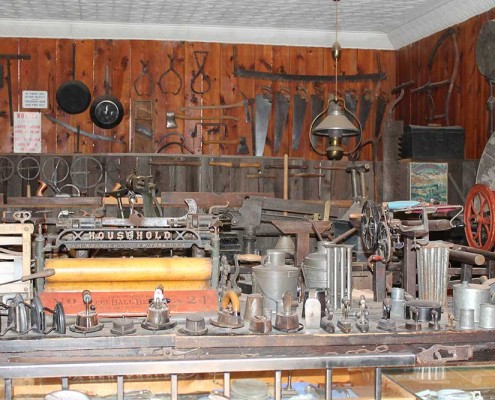 This is a reconstruction of an original Prescott tin shop, the Fredrick & Hill Tin Shop. Its construction was donated to Pioneer Arizona by the Goettl Brothers Metal Products Company and the Goettl family. It is based upon an 1880 photograph. Samuel Hill became the owner in the 1870’s, expanding to hardware and household goods in the 1890’s. Many utilitarian objects (coffee pots, dippers, lanterns) were fashioned of tin plate and were essential to domestic life in the 19th century. The craft of the tinsmith was a very important one in America from the colonial period through the 19th century. The tin shop also provided items made of copper and iron. This exhibit currently displays antique tin ware, firearms, tools, and locks.

Tin utensils have virtually been replaced by items of aluminum, stainless steel, and ceramic in the 20th century. However, in Territorial days, many utilitarian items for home use (including cookie cutters, candle sconces, toasters, roasting ovens, strainers, graters, funnels, milk pans, and later highly decorative trays, teapots, and watering pots with brightly painted designs) were made of tin.

Often, the tinsmith spent his winters producing items for sale. Then, during the more favorable seasons, he and his assistants would roam far and wide in their famous wagons peddling their wares and doing repair work.

Incidentally, the expression “not worth a tinker’s dam” derives from the dam of flour and water used by the tinsmith to keep his solder from flowing too far during the repair of a utensil.

The Mercantile (Reconstructed)
Scroll to top