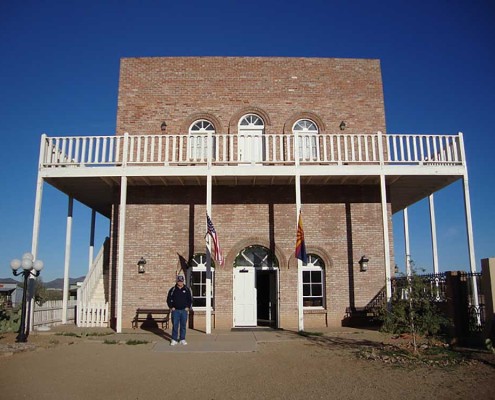 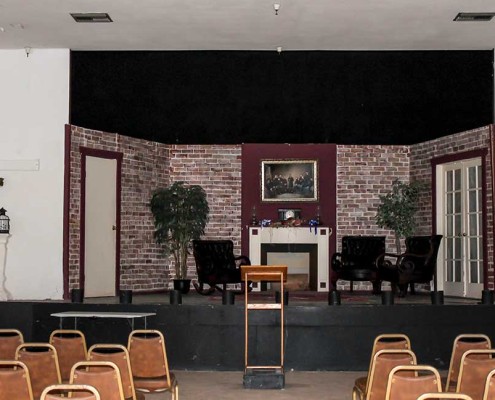 Mr. James Howey, a blacksmith in Prescott, was erecting a two-story building when he entered into a contract with the Goldwaters to use his building as a general store. In 1876, the Goldwaters opened their first store in Prescott using Howey Hall and maintained their operation there for three years.

Howey sold the building to Levi Bashford, who built a stage on the second floor and opened a theater with a seating capacity of 200-250 people in 1882. This Opera House, still known as Howey Hall, featured such attractions as John Drew and Lily Langtree, the famed “Jersey Lilly.” He later remodeled, adding dressing rooms and installing upholstered chairs. About the same time, he installed an ice-skating rink downstairs.

In 1891, owners H.D. Aitken and B.M. Goldwater gutted the building and moved the theater to the ground floor. At the Grand Reopening, local artists performed Gilbert and Sullivan’s “H.M.S. Pinafore.” In 1894, the Opera House was deemed “unsafe,” and after hosting lectures, services and a few last performances, the building ceased to function as a theater after 1899.

It then became a second hand store. Since the building had such a good location, the city bought it in 1904 and turned it into a fire station. When Prescott built a new fire station in 1956, the building was used as offices for the city. In May 1959, Howey Hall was torn down. The bricks were acquired by Pioneer Arizona and used in this authentic reconstruction of the building as it stood during its Opera House period.

The melodrama, staged in the Opera House, served a significant form of entertainment for the community. The audience participated vocally by booing, cheering, and shouting for cast members.

The theatrical style typical of the late 1800’s and early 1900’s was full of comic gestures and larger-than-life movements. This style of entertainment originated in the United States in the latter period of the 19th century. Melodrama is the forerunner of silent movies which glamorized actors such as Valentino and actresses such as Mary Pickford. Even today, an identifiable strain of melodrama is portrayed in TV soap operas.

Early plays were transitional. They portrayed the development of the frontier and the problems encountered by pioneers in traveling to it. Drama was not taken very seriously. Melodrama, however, was very popular and came to be known as the dramatic contribution of the era. Street theater evolved from “medicine shows” which consisted of selling elixirs in a show-time fashion.